Facing Future is arguably IZ’s most popular album. Released in 1993, to this day it remains the best-selling album of all time by a Hawaiian artist. It reached Platinum status in 2005, selling more than one million copies, the only Hawaiian music album to do so. The album’s sales are driven not only by its popularity with Hawaiian audiences, but also by its appeal around the world. The delicate medley “Somewhere Over the Rainbow/What a Wonderful World” has been licensed for use in movies, television shows and commercials, both in the United States and abroad. Although Facing Future was actually IZ’s second solo album, it was this recording that introduced millions of people worldwide to Israel’s stunning talent. Also including the beloved tune “White Sandy Beach” and the bookends of “Hawai`i ’78”, Facing Future is the essential soundtrack to Hawaii.

E Ala E was Israel’s third solo recording, released in 1995. Several of the songs on this album are slightly political in nature, as IZ became the voice for his people and a champion of his Hawaiian culture. There are also lighter Hawaiian ballads, and E Ala E even features a reunited duet with his deceased brother Skippy, thanks to studio technology. IZ was motivated to carry on Skippy’s mission of perpetuating the spirit of the sovereignty movement, and the title track “E Ala E” became the anthem of solidarity among the Hawaiian people. There is also a whimsical side of IZ captured on this album with “Theme from Gilligan’s Island”. Perhaps the final track “A Hawaiian Like Me” says it all: there will never be another Hawaiian like IZ.

N Dis Life is the final studio recording of original music before Israel’s death in 1997, and reached #3 on the Top World Music Album chart. The songs span a wide range including gorgeous ballads, traditional Hawaiian, and uplifting island rhythms. N Dis Life won a total of five awards at the 1997 Na Hoku Hanohano Awards, Hawai`i’s equivalent of the Grammys, including Album of the Year, Male Vocalist of the Year, and Favorite Entertainer of the Year. IZ’s gentle vocals and ukulele are perfect in the classic “Hi`ilawe”, and “In This Life” is a poignant and touching tune for his final recording. IZ’s spirit truly shines through on this album.

Israel IZ Kamakawiwo’ole’s captivating voice continues to regale the world, far beyond his own lifetime, into the next century. His appeal is universal. His probing yet reflective style is spellbinding. IZ exemplifies the global celebration of Hawaiian music.

1993 and 1995 broadcasts of KHNL/K59’s Hot Hawaiian Nights” television series gave local people a glimpse of IZ’s live performances. This DVD gives IZ fans the chance to witness his unique style on the ‘ukulele and his uncanny sense of humor.

IZ: The Man and His Music.

The performances captured on Island Music, Island Hearts give everyone an opportunity to bask in the immense presence of IZ. Share previous moments with IZ as he joins friends at Waioli Tea House in Manoa Valley, performs with just his “ukulele on beautiful Waimanalo Beach and in a concert among the pohaku at the historic Miloli’i fishing village on the island of Hawai’i. 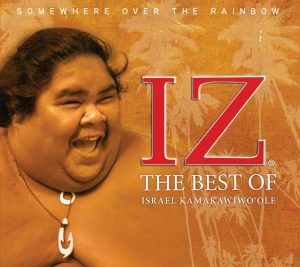